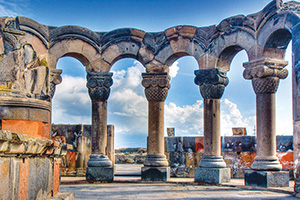 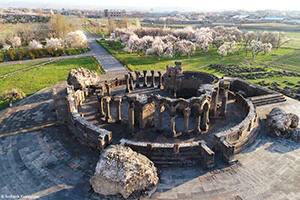 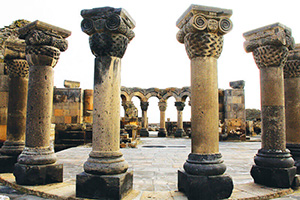 Zvartnots Temple, situated not far from Echmiadzin (Vagharshapat), is one of the most magnificent masterpieces of Armenian architecture and art in the early Middle Ages. The temple of Zvartnots, also called St. Grigor (in honor of Catholicos Gregory the Illuminator), is built on the initiative of the Catholicos Nerses 3d Tayetsi (Shinogh), in 641-661. “Zvartun” heavenly hilarious, angels, so ”Zvartnots” means ”the house of the angels”. Today, the remains of this magnificent structure have survived due to the excavations done at the beginning of the 20th century. The ruins are so impressive and exquisite. The renowned Armenian architect Toros Toramanyan took part in the excavation works. He studied, measured the remains of the church and made the rebuilding plan of this magnificent temple. 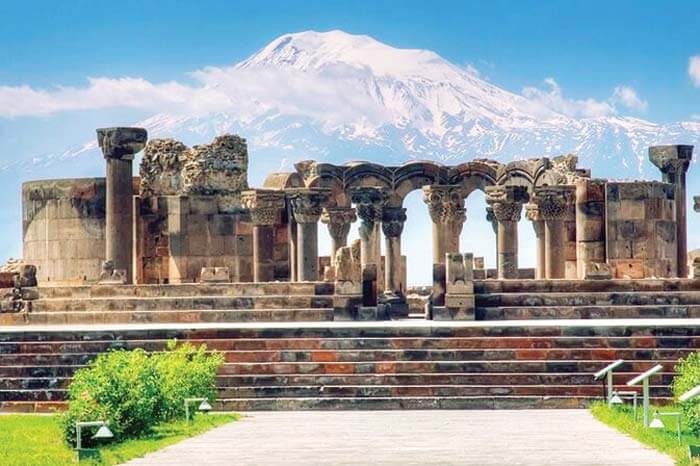 According to the plan of the great architect, the temple of Zvartnots is represented as a center-dome building with a gradually decreasing circles around a three-stage, vertical axis, about 45 meters high. The temple was built of brown, light gray to black tuff, had five entrances. Zvartnots has a rich set of decorations. The grape vine, granade branches, and the busts of spiritual and secular people are engraved on the stone. Some of them are painted with the builders’ tools in their hands, and one of them is engraved with the name ”Johan”. Perhaps he was the master of the temple, the construction manager. In Armenian architecture, Zvartnots was a completely new type of structure, and its impact was further widespread in Armenia, as it is the Yerevan Opera and Ballet Theater building.