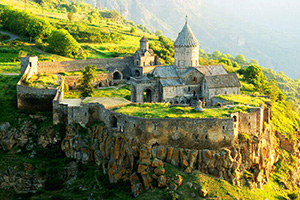 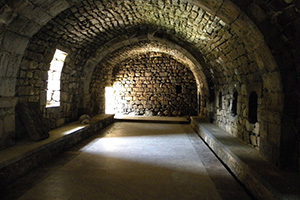 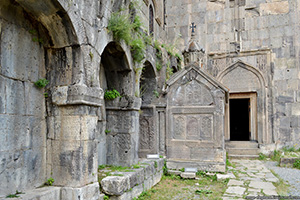 The complex of the Tatev monastery consists of three churches, refectory, book – stack, tomb and protective structures. The ancient and main church of the monastery is dedicated to St. Poghos Petros. It was built on the initiative of Bishop Hovanes in the 895-906 years. One of the masterpieces of medieval Armenian architecture is the Tatev monastery. It is located on a hill which is surrounded on three sides by deep chasms, and it can only be reached from the north. According to tradition, the monastery was named after the disciple of the Apostle Thaddeus – Eustateos. The entire composition of the monastery complex Tatev is in perfect harmony with the magnificent mountain scenery. The construction of the Tatev complex lasted about 500 years. Syunik Bishop Davit, in 839, bought the Tatev village from Prince Philip and transferred here the province’s diocese. Since the 10th century the monastery of Tatev was a famous spiritual and cultural center of Syunik and a large monastic institution. In 1304 on the initiative of Stepanos Orbelian bronze bells were made – rare works of metal artwork. 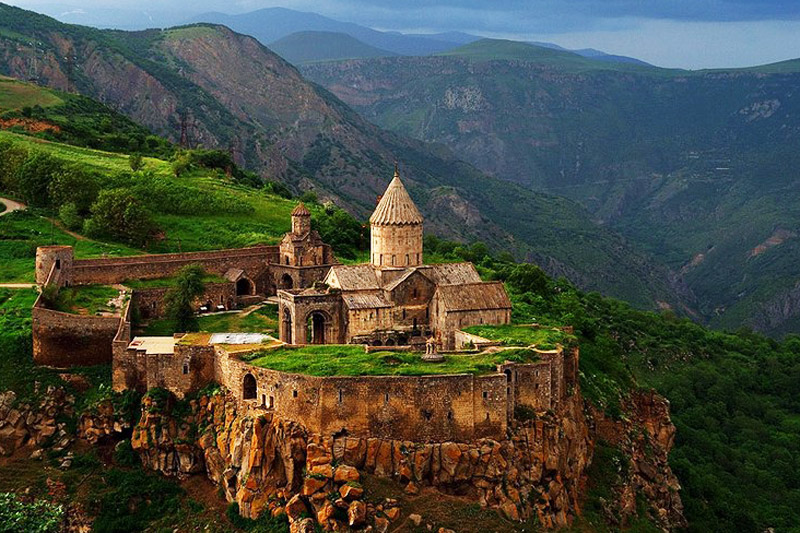 The walls of the church from the inside are covered with frescoes, which are considered to be unique examples of Armenian monumental art. At the end of the 14th century Tatev University – the largest educational institution was founded here by the efforts of Hovhannes Vorotnetsi and the Orbelian princes. The buildings of the Tatev Monastery were repeatedly destroyed by enemies during their existence, monastery treasures were robbed, and manuscripts burnt. The monastery also suffered from several earthquakes. Nevertheless, the destroyed churches and other buildings were reconstructed and renovated by the Armenian people and reached the 21st century. In the monastery complex, a 15-meter swinging column is remarkable, which is one of the unique examples of Armenian architecture and construction art. It stands in an octagonal hole surrounded by quartz. The monument is unique in terms of construction art – the column is rocking but has been preserved for many years. In 1976, according to the Armenian government’s decision, reconstruction of the Tatev complex was carried out, to preserve it in its original form for future generations. The monastery complex Tatev has historical and architectural value, which brings great honor to the Armenian people.