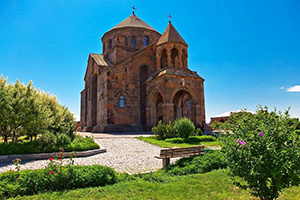 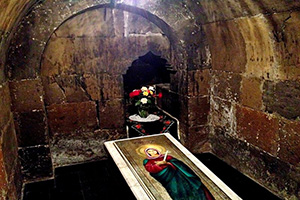 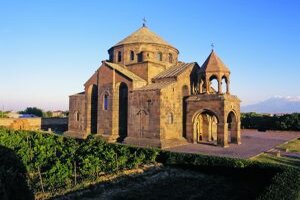 According to the tradition, 32noble cristian women led by Hripsimeh, persecuted by Emperor Diocletian of Rome (284-305) fled to Armenia and preached Christianity, but were killed in Vagharshapat (now Echmiadzin) by Tiridates, the great king of Armenians. Nine days after their death Gregory the Illuminator was released from prison and buried the martyrs. Tiridates, redeeming, brought stones brought stones from Ararat and in the place of their death, outside the walled Vagharshapat, Gregorry built a barrow, on which a stone-made shade on four pillars was erected. The persians destroyed it in the 5th century but Sahak Partev built a new one. Katholikos Komitas 1st Aghtsetsy built St. Hripsimeh cathedral in the same place in 618. The cathedral was half-destroyed in 17th century and Catholicos Philipos rebuilt it in 1653. The cathedral was walled in 1776 and belfry was constructed in 1880. 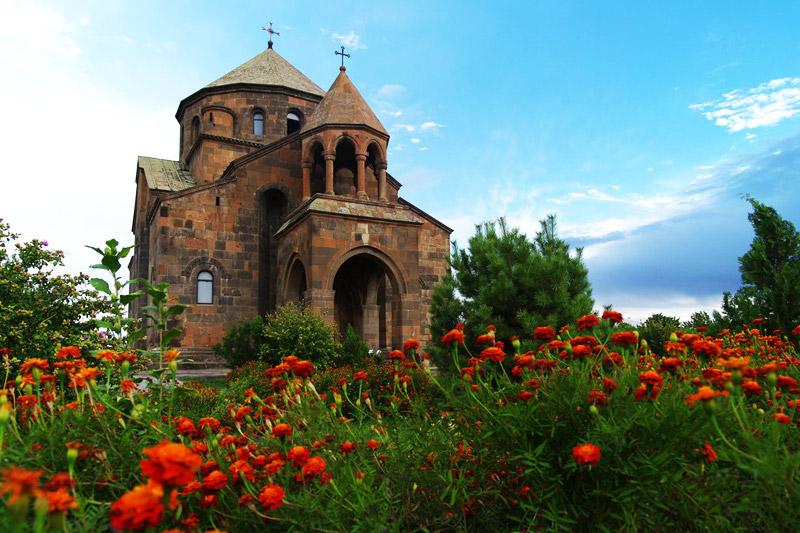 St. Hripsime Cathedral is the most modern example of the domed church of Armenia in the 5-6th centuries. It has a harmonious solution of the functional, structural and artistic issues of the church building. The temple has a complete and beautiful interior. It is made of large and small eight-holes with a corrugated dome that lays in the arches. From the outside the temple has different heights and roofs. The dome is covered with a scarlet cap that is called a tire. Externally, the walls are made of two holes, which, like the shadow of a light and shade, give life to the structure. These external hollows of the Hripsime temple were innovative in construction, and foreign scientists call them “Armenian hollows”. During the restoration works and excavations in 1958 it turned out that the cathedral had been built on the site of e heathen temple.