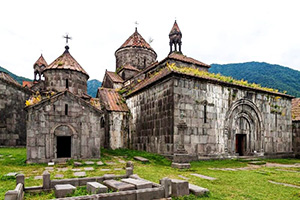 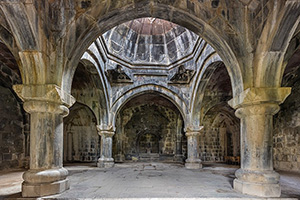 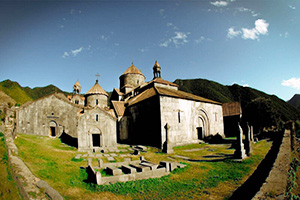 Haghpat Monastery is one of the largest and most important monasteries in Armenia. The monastery on the high plateau is bordered on the one one side by the peaks of the hills Surb Luys and Terunakan, and on the other side by the Lori fortress and in the Sagidzor canyon where flowing streams of the rivers Saghik and Kayan. Founded in 976, the complex of architectural structures consists of religious and secular buildings surrounded by towers and fences. The monastery’s first and main structure is the St. Nshan Church (976-991), founded by Ashot 3d Bagratuni’s wife – Khosrovanush queen and donated to his sons Smbat and Gurgen. It is assumed that the architect was a well-known Trdat Anetsi. The church is a domed hall. In the 13th century the walls of the church were decorated with diverse frescoes. 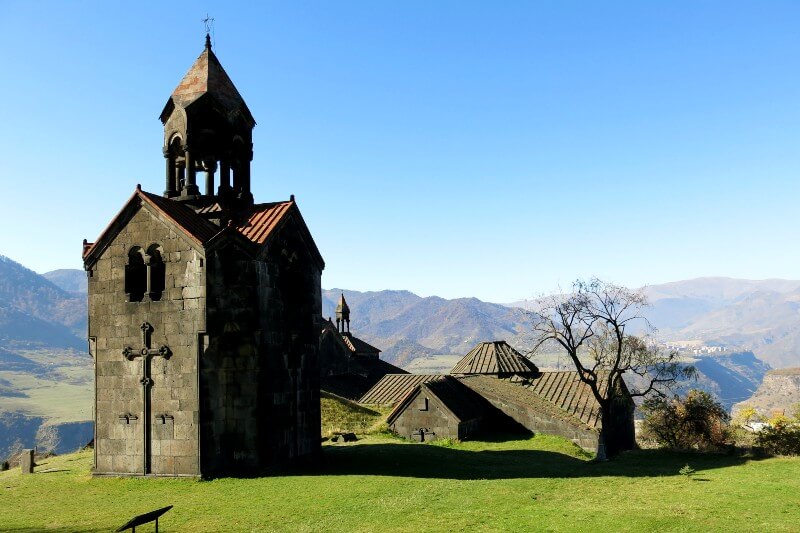 The complex includes the later built Surb Astvatsatsin and St. Gregory Churches, the chapel, the refectory, the bell tower. The facades of the almost all structures, as well as the original cross-stones and their pedestals, are covered with professionally – made ornaments. The last period of life of the great Armenian poet and musician (ashugh) Sayat-Nova is connected with Haghpat monastery. In the 12th-13th centuries a whole set of famous miniature painters worked in the monastery of Haghpat. Here they created their own autonomous miniature school. Finally, the famous Gospel of Haghpat was imitated here. The monastery of Haghpat has been exposed to numerous raids, has suffered from earthquakes, but has been repaired again. In 1996 Haghpat Monastery was included in the UNESCO World Cultural Heritage list.