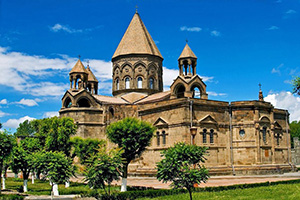 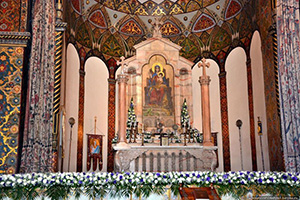 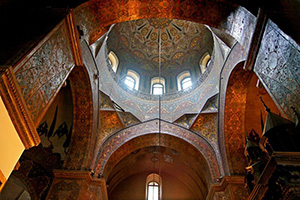 In the very first years of proclaiming Christianity as a state religion in Armenia (301-303) Cathedral of Vagharshapat (Echmiadzin) was built through the efforts of King Trdat 3-d of Armenia and Grigor Lusavorich (Gregory the Illuminator). This monastery was the most famous building of the time because of its architecture. According to Agatangeghos, the 5th century Armenian historian, The choice of the site for the Cathedral was conditioned by the following tradition. St. Gregory the Illuminator saw a dream ion which the only Begotten Son of God descended onto the earth with a golden hammer in his hand and pointed to the place where the Cathedral was to be erected. Thus, the word Echmiadzin derives from this vision, meaning the place wherethe Only Begotten Son had descended. In the Cathedral, under the central dome , stands ”The table of Descent”. The monastery is also comprised of the Catholicosate, the old chapel, the seminary, the hotel and many other structures. During its existence, the temple has undergone a lot of rebuildings, and its initial forms have been significantly violated. 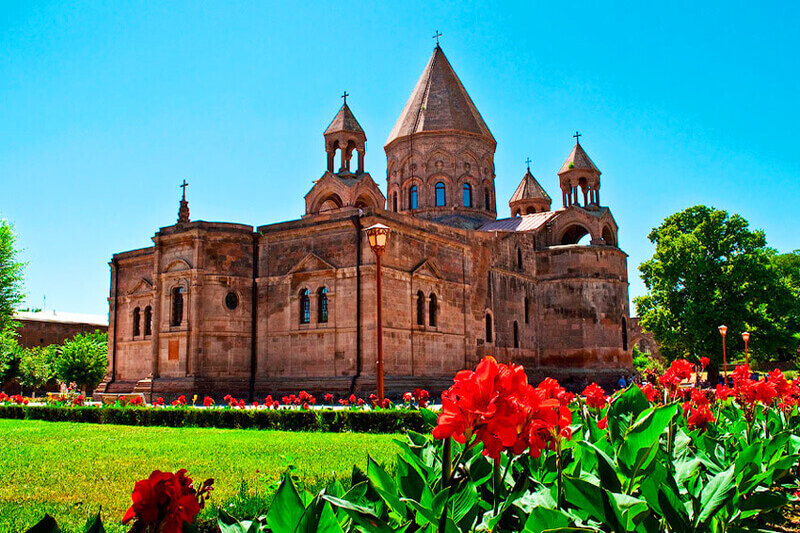 Evidence on the original appearance of the Cathedral is contradictory. It is knowon, however, that the crucifurm cathedral around a central axis dates back to the 5th century. The last reconstruction of the Echmiadzin Cathedral was carried in 1955-57. The foundations of the building were reinforced, the floor was covered with marble, the inner walls were decorated with ornaments. Enormous work was carried out around the buildings, the surroundings were refurbished, grass and trees were planted, walls were built around the territory. It is necessary to mention the following among the buildings of Holy see: ”Gate of Trdat”, The Cathedral Guest House, lake, the New Resisense and Matenadaran (depository of monuscripts). According to the engraved inscription on the dome of the temple, the frescoes are made by famous Armenian painter Naghash Hovnatanyan. His work was continued later by Hovnatan Hovnatanyan. These paintings are valuable sample of the 18th century Armenian art. The Cathedral of Echmiadzin has been and remains the sanctuary of the Armenian people and the Armenian spiritual center since its inception. By the decision of UNESCO on November 27, 2000, Echmiadzin Cathedral is one of the world’s cultural values.