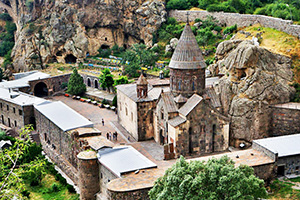 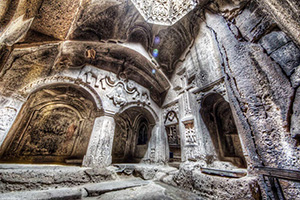 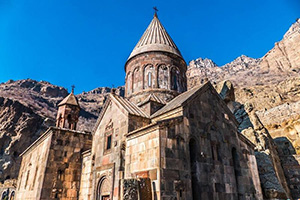 Ayrivank-Geghard or Geghardavank (Geghard Monastery) is a magnificent monastery where Armenian stone-maker and architect Galdzag carved two churches in a cliff. It is located on the slopes of the cliffs descending on the River Azat, cut off on the slopes. According to the tradition preserved in Armenian bibliography, the foundation of the monastery is attributed to Grigor Lusavorich (4th century). In ancient times, the monastery was called Ayrivank due to the local cave structures. The caves were natural and artificial, some of which were of protective significance and were called by the names of national heroes. According to the church tradition, a spear (in armenian ”geghard”) had been preserved here, which had pierced Christ. That’s why the monastery was later called Geghardavank. The Holy Spear was brought to Armenia in 1159, and in 1250 during the Arabian conquest, it was brought to Ayrivank, the forgotten shelter in the mountains, to hide its past. The spear had been kept here until 1419. Now it is in Holy Etchmiadzin. 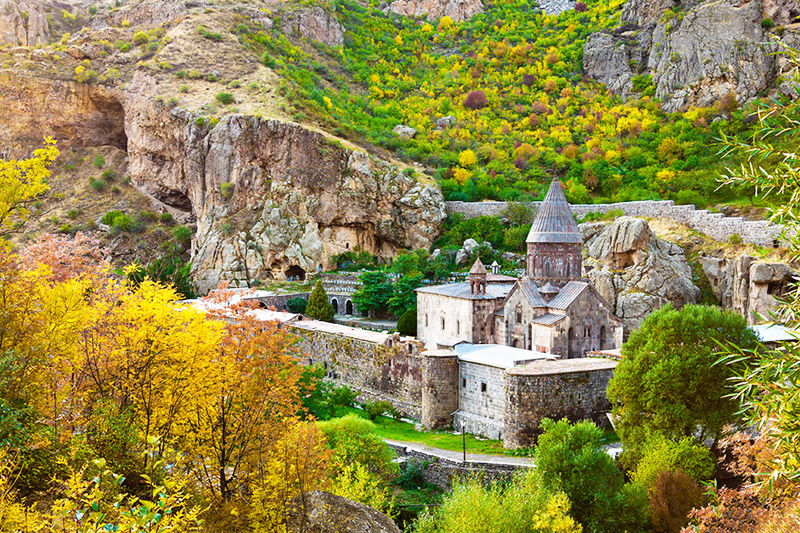 Geghard monastic complex is famous for its overland and rocky temples, all dating back to the 13th century and considered to be the result of the Zakarian and Proshyan dynastys’ construction activities. The main church, St. Cathoghike Church, was built in 1215 during the ruling period of the Zakarians and belonged to crossed – dome churches. The complex also includes St. Avazan and St. Astvatsatsin churches, numerous cave rooms. Geghard is also known for his rocky cross-stones (khachqar). The walls of churches and a number of adjoining buildings are covered with high art sculptures. The inscriptions of the ancient monument provide remarkable information about the events of that time. Geghard is one of the most important architectural monuments of medieval Armenia and has been an important spiritual and cultural center for many years. There was a rich library where copied and illustrated many manuscripts. The monastery complex of Geghard is an exceptional example of truly harmony of architecture and nature.