Things to do in Yerevan

Yerevan offers its culture and history to the curious tourists interested in historic-cultural tourism. It is one of the cities of the world where you can see many historic monuments and mausoleums, as well as visit various places of entertainment. Here you will definitely find interesting places and will get acquainted with the Yerevan life and day-to-day life. Below the main must-visit places in the ancient city of Yerevan are presented. 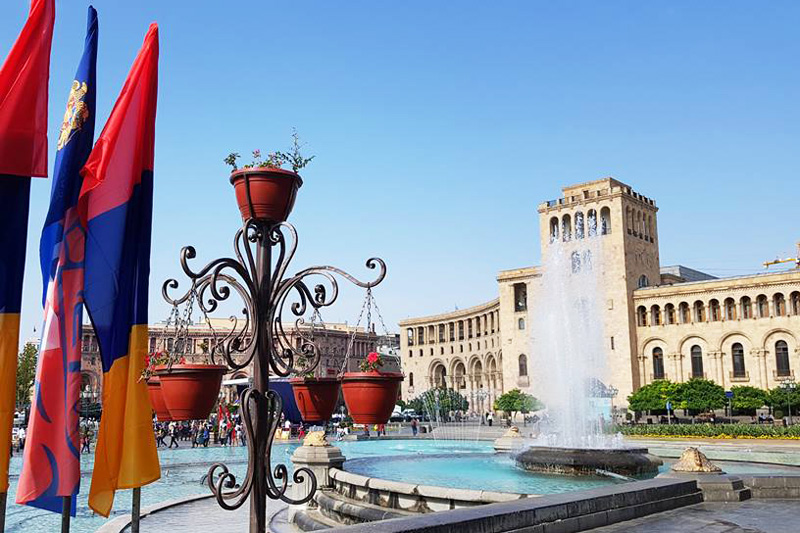 The Republic Square, considered to be the heart of Yerevan, was designed by Alexander Tamanyan, the city's chief architect in 1924-1936. It is located in the central part of the city: at the intersection of Amiryan, Abovyan, Nalbandyan, V. Khachatryan Sargsyan Streets and Tigran Mets Avenue. In ancient times the square was named after Lenin, and there his statue standed that was destroyed after the collapse of the USSR.

Attached to the Square are the Government House, the main post office building of Armenia, the Armenia Marriott Hotel, the Museum of Armenian History and the National Gallery. The square is dominated by arches, national ornaments, and the delicate pink of stone buildings. Oval shaped square adjoins the table-top with a large pool and fountains. There are colorful music fountains in the Republic Square, which fascinate Yerevan residents and city guests during the summer months. 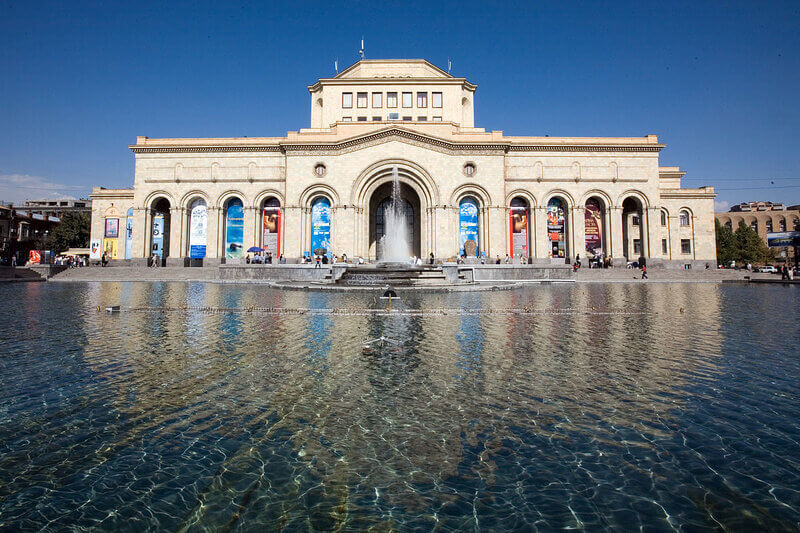 The National Gallery of Armenia has its unique place among the cultural institutions of the Republic. Since its establishment in 1921, the rich collection gathered by state and public figures, artists, collectors and a number of other individuals, includes a large collection of national and international fine arts and decorative-applied art, from ancient times to the present day.

The main focus of the collection is Armenian art, which is presented in a permanent exhibition with important stages of historical development: medieval frescoes and miniature paintings, 17-19th century church painting with sculpture, applied art, brilliant constellation of new and modern times - Hovnatanyan, H. Aivazovsky, V. Surenyants M. Saryan and many others. Here you can definitely find the fine art direction close to your heart. 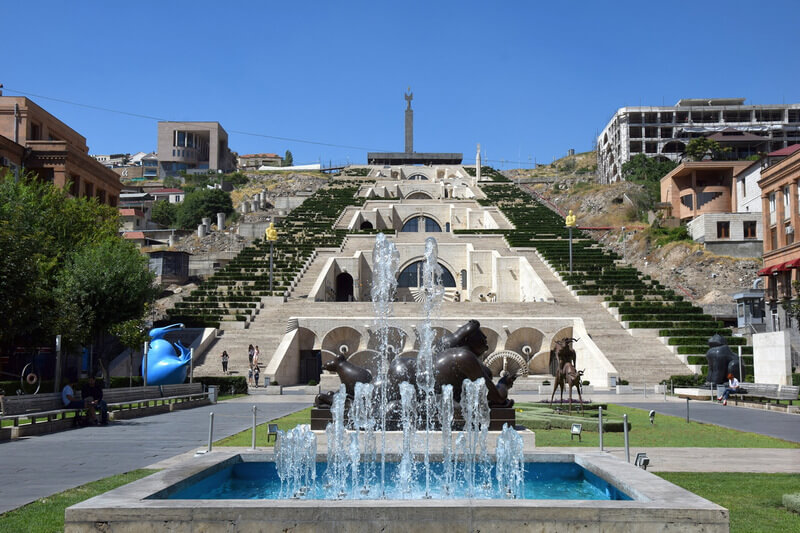 The Yerevan Cascade Complex was built in 1970. Each of the five levels of the 572-degree complex features the works of world-renowned sculptors Fernando Botero and Lynn Chadwick. The Cascade Complex connects the center of Yerevan with Victory Park, where the statue of Mother Armenia is located.

The Cascade Complex is full of green areas, fountains, flowers and benches in line with the complex. 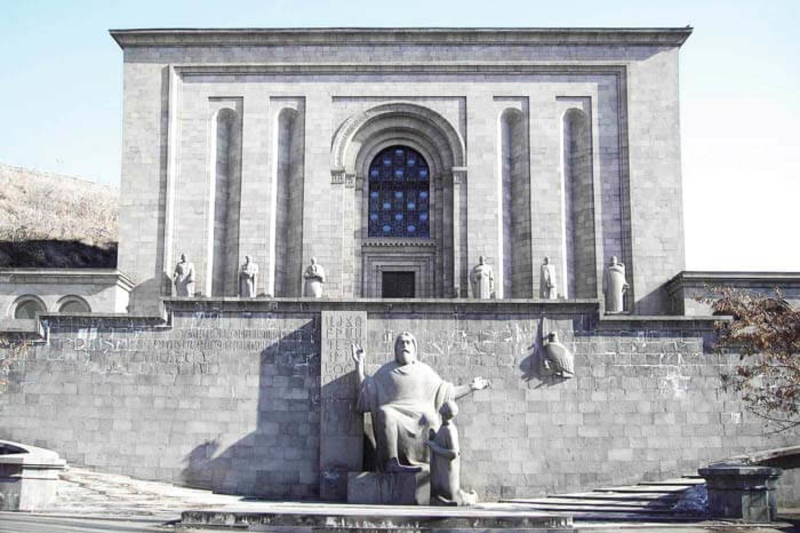 The Matenadaran after Mesrop Mashtots presents a unique collection of 17,000 ancient and unique manuscripts that have been on the UNESCO World Heritage List since 1997.

It is considered one of the most important sites of "Preservation and Development of National Memory".

Here you have the opportunity to see fragments of ancient manuscripts, antique books, specimens of precious materials, documentaries, individual miniatures, and more. 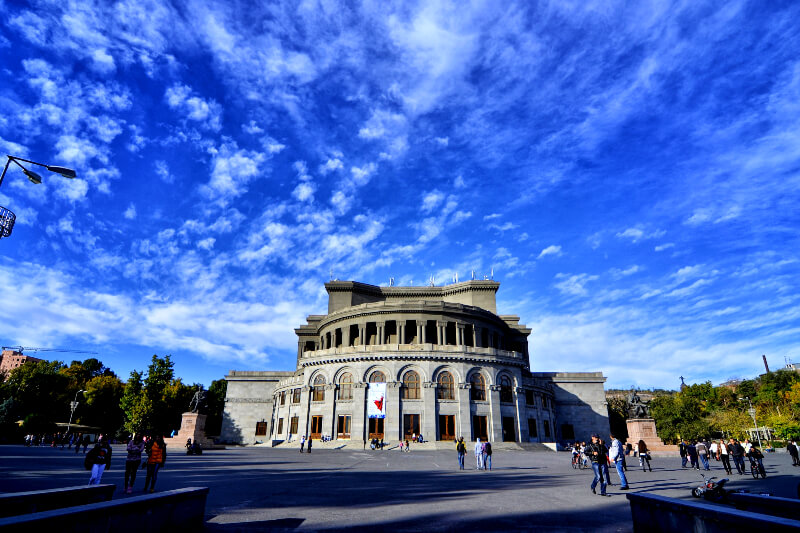 National Academic Theater of Opera and Ballet after Alexander Spendiaryan

The Alexander Spendiaryan National Academic Opera and Ballet Theater is located in the center of Yerevan on Freedom Square. It is not only a cultural center but also an architectural masterpiece authored by architect Alexander Tamanyan. It consists of two halls - a large concert hall for 1,400 spectators and an opera house for 1,200 spectators. Statues of famous Armenian writer Hovhannes Tumanyan and great Armenian composer Alexander Spendarian, as well as the statues of world-famous Arno Babajanyan and Aram Khachatryan are in front of the Opera House. There are many performances and concerts performed in this building. You can also participate in and attend Armenian and foreign art evenings. There are many cafes next to the building where you can listen to classical music or just enjoy the evenings in Yerevan. 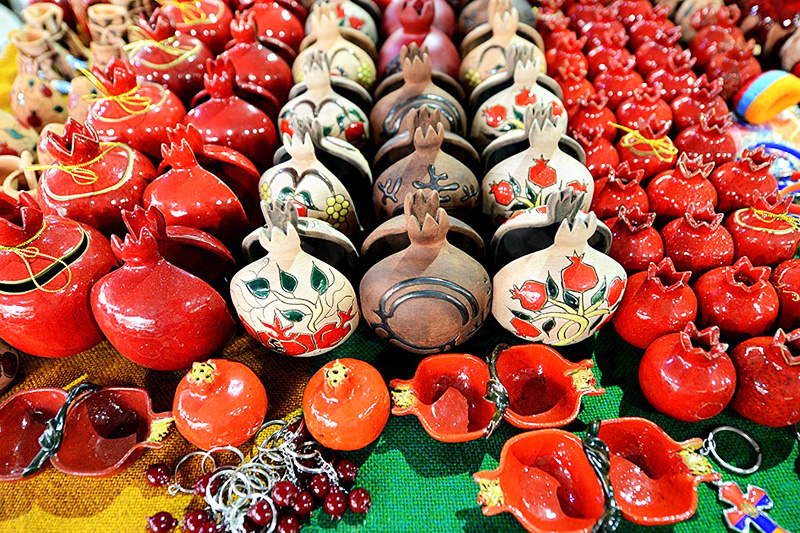 Here you can definitely buy a souvenir at an affordable price and take a small piece of Armenia with you. 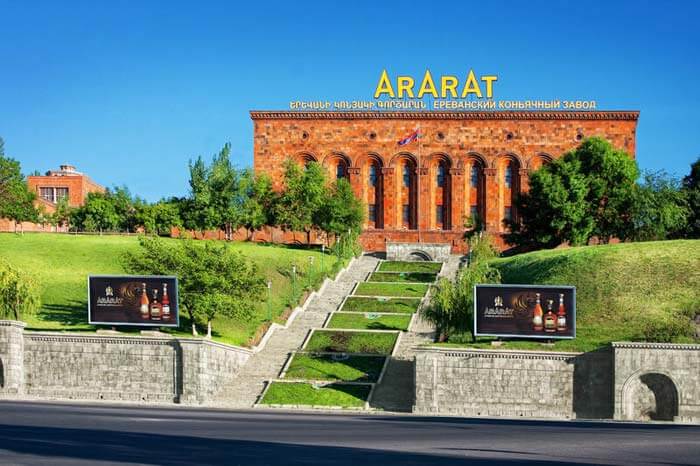 You should definitely visit Ararat Cognac Factory in Yerevan and taste the world famous Armenian cognac.

Armenian brandy making was founded in 1887 by merchant and philanthropist Nerses Tairyan, who first introduced classic French distillation technology in his factory.

At the factory you will be given the opportunity to get acquainted with the technology of legendary brandy making, accompanied by a guide and commentator, and at the end of the tour enjoy the unique taste and unique aroma of brandy. 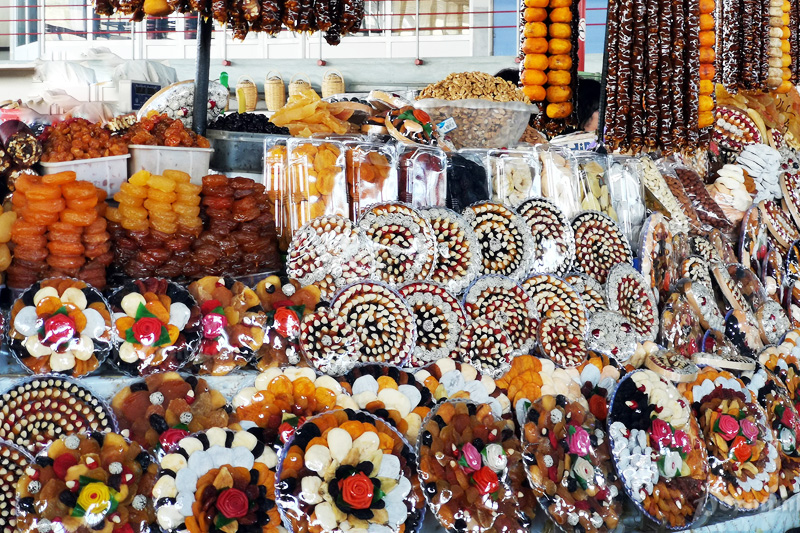 The Armenian people have been known for their hospitality for centuries, in which rich and divers cuisine, sun-dried fruits and vegetables, unique spices and sweets play an important role.

The food used in Armenian cuisine can be easily found in Armenian market. One of the most visited markets is the Gum Market, which got its name from a nearby store.

Here you can taste and then buy organic dairy products, fruits and vegetables, spices, dried food, sweets and more. The GUM market is one of the unique places in Yerevan where you can not only shop, but also get acquainted with the Armenian lifestyle. 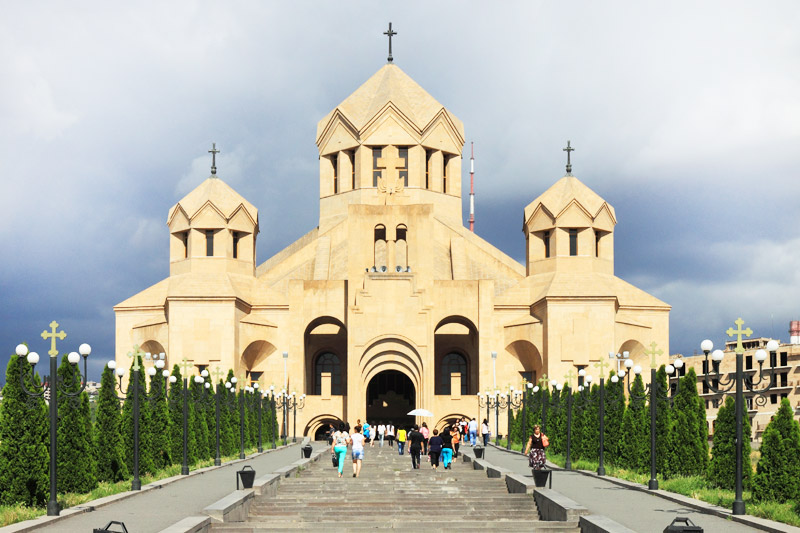 On the 1700th anniversary of the adoption of Christianity in Armenia as a state religion, a magnificent church was built in Yerevan in 1996-2001, with the classical Armenian style, where about two thousand five hundred believers can pray together.

This modern church is not like any other church bulit in the Middle Ages.

Being situated 15 meters above the surrounding area, the church is visible from many places in the city center, as well as from Republic Square and enriches the panorama of downtown Yerevan with its large and impressive volume.