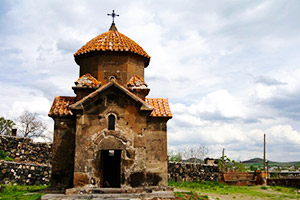 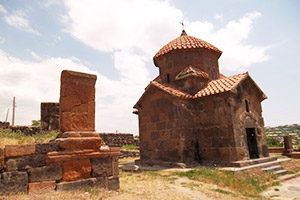 Small and simple, beautiful and mysterious St. Astvatsatsin or St. Karmravor Church is located in the high city Ashtarak. Unfortunately, we do not know the date of foundation of the church and the name of the architect, but it is assumed that it is a 7th century Armenian architectural monument. According to the tradition, three sisters, who fell in love with the same young man, Sarkis, lived in Ashtarak many centuries ago. Two older sisters decide to sacrifice themselves and their love for the happiness and love of the younger sister. They dressed in red and apricot – color dresses, thrown into the deep canyon. Knowing the awful news of the sisters’ death, the younger sister wore a white dress and thrown into the gorge. Three churches were built on the edge of the canyon – Karmravor, Tsiranavor and Spitakavor (karmir – red, tsiran – apricot, spitak – white). St. Karmravor Church is one of the typical and purely preserved specimens of the crossed domed structures. According to the latest researches, this type was developed in Armenia in the 5th century and has many examples. 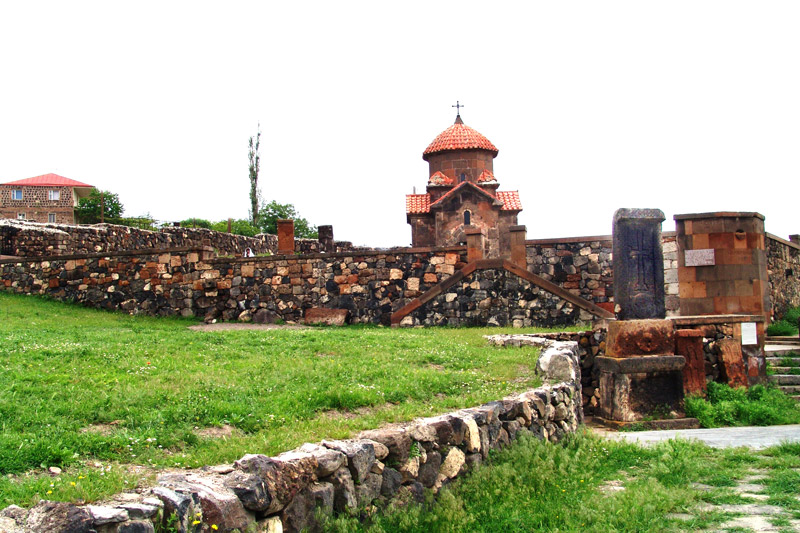 Inside the church thera are preserved frescoes on the walls. As a monolithic statue the structure is harmoniously impressive due to the highly-arranged proportions. There are interesting khachkars (cross-stones) around the church Karmravor, from which Tsak-Kar is well known. Its name comes from the hole (in armenian hole – tsak) on the pedestal. It is known that Karmravor was also a monastery in the 18th century. There is an indefinitely illustrated curtain from Calcutta and a handwritten gospel of Shoukhonts donated by the Shoukhyants family. Armenian famous poet G. Emin is buried in the church yard. He expressed his desire in poetry form to be endlessly slept in the yard of Karmravor Church.