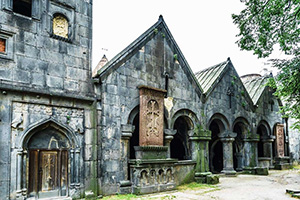 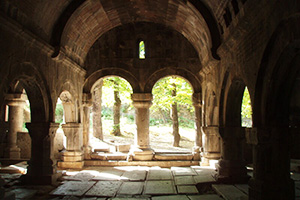 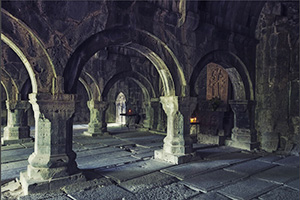 Sanahin Monastery complex is located on the right bank of the Debed river, in the village of Sanahin. The complex was founded by Ashot III Bagratuni in 966. Since the end of the 10th century it became an administrative center and a burial vault of the Kurikyan dynasty. In X-XI centuries, the monastery was a major cultural center, a university and a rich library were founded. At the end of the 12th century the complex was subordinated to the ruling of the Zakaryan dynasty. Sanahin Monastery is one of the most significant historical and architectural monuments of medieval Armenia. It consists of the St. Astvatsatsin Church and St. Amenaprkich, 3 vestibules, a belltower, a library, a seminary and a chapel of St. Grigor. These structures, grouped around the St. Astvatsatsin Church, have evolved into a single architectural complex over the years, where due to the correct installation of individual construction sites, the structural balance is evident. The St. Astvatsatsin Church (Mother of God) is the oldest monument in the complex. It was built in the first half of the 10th century. The domed hall is one of the earliest examples of an architectural type. 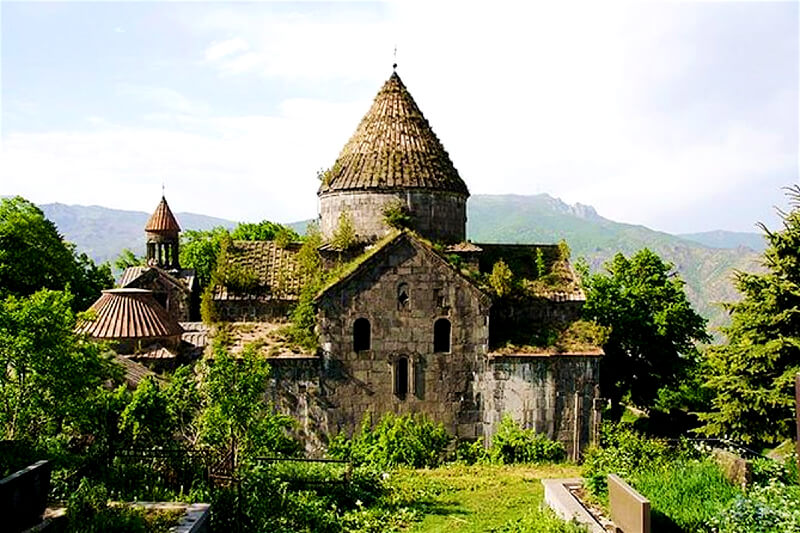 Although it has a rectangular outline from the outside, it is cross-shaped from the inside. On the walls there are traces of frescoes. The St. Amenaprakich Church (the Savior) or St. Katogike Church is the main temple of the monastery. It was built in 957-966 by the wife of King Ashot Bagratuni – Queen Khosrovanush in honor of the sons of Gurgen and Sevak. On her initiative, the University of Sanahin was founded, which became one of the most famous educational and literary centers of medieval Armenia. According to tradition, the Sanahin Monastery was built in the place where Grigor Lusavorich put a cross in the 4th century. It was founded a little before the monastery of Haghpat, and that’s why it got its name (” Sanahin ” in armenian means ” this is older than the other one (the monastery of Haghpat) ”). In 2001 the Sanahin monastery complex was included in the world cultural heritage of UNESCO.