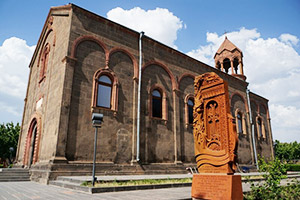 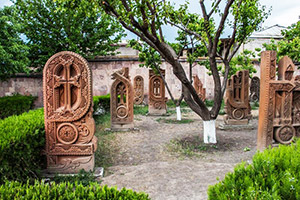 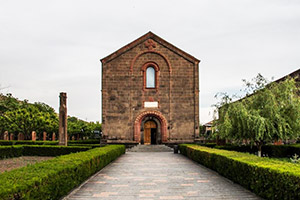 Oshakan is directly connected with the creator of the Armenian alphabet, the founder of the school of Armenian language and literature Mesrop Mashtots. Probable year of Mashtots’s birth is the year 361. In 394 he became a monk and accompanied by his disciples began to travel in different provinces of Armenia, spreading Christianity. Mesrop Mashtots orally translated the Bible in Armenian to make it understandable for Armenians. His translation of the Bible is considered the best in the world. After the death of Mesrop Mashtots, in 440, prince Vahan Amatuni and commander Hmayak Mamikonyan transported his body to Oshakan, where Prince Vahan Amatuni built the chapel in 443. In 1639-45, the Catholicos Philippos Agbaketsi completely restored the chapel. The building of the present St. Mesrop Mashtots church was built in 1873-79 by Catholicos Gevorg Constandnupolseci. The new church is a funeral hall with an oval construction. On both sides of the main altar there are rectangular sacristies, one of which is the entrance to the mausoleum of Mashtots. The exterior facades of the church are decorated with decorative stones. 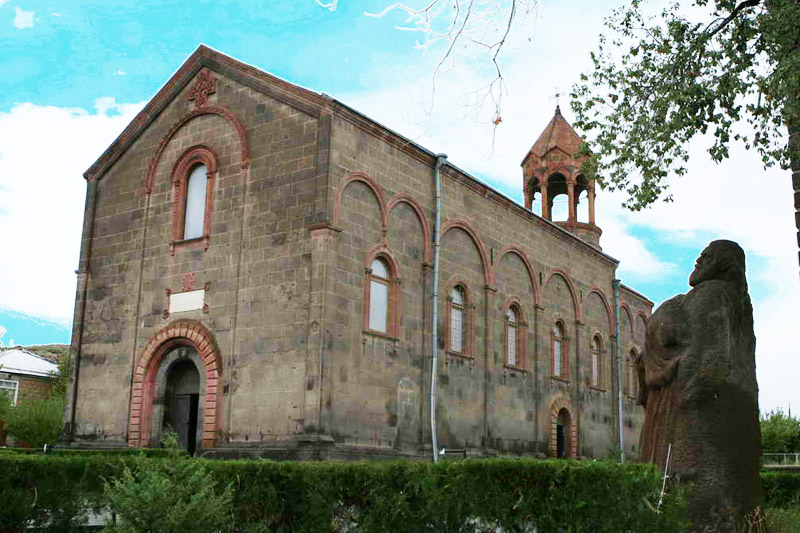 In 1884, a two-story bell tower with an eight-column rotunda was added to the church, which is unique in Armenian architecture with its cylindrical volume and access to the main altar. On the south side of the church there is a monument to Vahan Amatuni (1880). Mashtots Mausoleum was renovated in 1960-64, and the basalt stone tomb was replaced by a tombstone from onyx, the neighborhood of the church was improved. In the years 1962-65 the interior of the Mesrop Mashtots’s church was decorated with thematic frescoes “Glory to Armenian language and literature”, two stone monuments resembling an open book were inserted at the entrance, on one of which was engraved the Armenian alphabet. Various seminars, international symposiums and an event called ”Targmanchats ton” (The Translator’s Day) are held in the Church of St. Mesrop Mashtots, which symbolizes the invention of the Armenian alphabet, the first Armenian Bible and the beginning of the Armenian language.