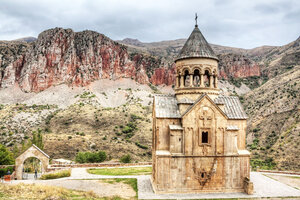 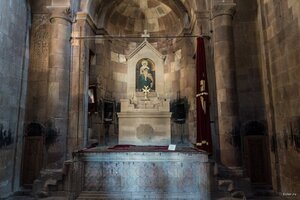 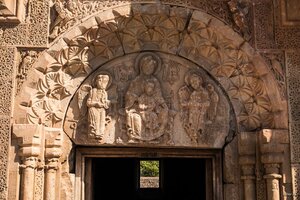 The Noravank monastic complex is located in 3 km northeast of the village of Amaghu, on the slopes of the deep gorge of the Arpa River. It was founded at the beginning of the 13th century and became Syunik’s spiritual, educational and cultural center, as well as the Orbelian family burial vault. The oldest church in the complex – Saint Karapet was built by Prince Liparit Orbelian in 1216-1223. The ruins of the church were discovered during excavations in 1982. The only entrance is on the west side. Near the church the main church of the monastery – St. Stepanos (1216-1221) is located. It was built by Liparit Orbelian and Archbishop Sargis. The complex also includes the St. Grigor church, the tomb of Prince Smbat Orbelian, as well as the three-story mausoleum of Prince Burtel. In the medieval Armenian art Noravank is distinguished with its unique biblical and evangelical thematic fine sculptures.In Noravank the famous miniature painter and sculptor Momik worked, who was also the secretary of the Orbelian family. He depicted the sculptures at the main entrance of the church and the facade stone sculptures and bass reliefs of the St. Astvatsatsin church. 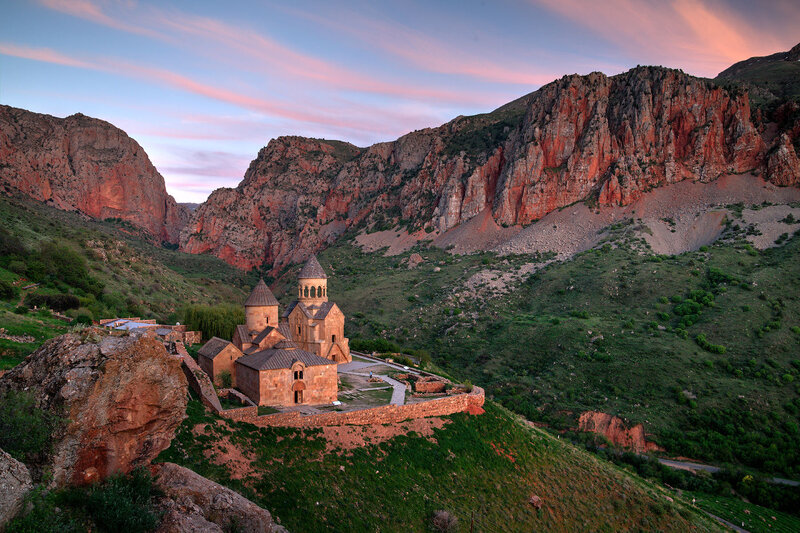 In Noravank there are many khachkars (cross-stones), among which Momik’s khachkars are distinguished by their high artistic merits. In 2010, a khachkar installed there dedicated to his 750th birthday, the Momik’s Museum was opened, a stamp and a medal were issued. Near Noravank there is the oldest famous Cave of Birds, where was found the oldest shoe in the world. Noravank with exceptional features of its structures and sculptures is considered the best Armenian architectural complex of 13-14 centuries.