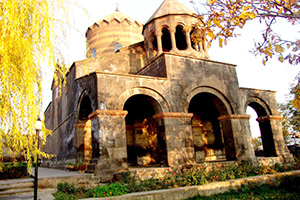 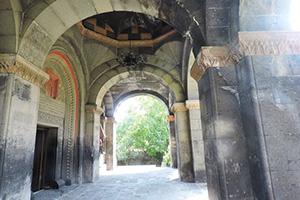 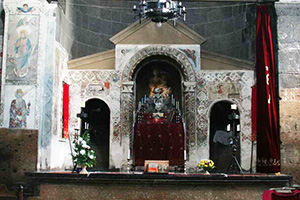 At the southern end of the Mughni village stands the St. Gevork Monastery, founded in the 13th century and completely rebuilt in 1664-69. According to the historian Zakaria Sarkavag, the monastery was founded by the Congregation of Hovhanavank, where the relics of St. Gevork were transferred. It is supposed that this happened in the first half of the 13th century, as already in 1278 the manuscripts were copied in the Mughni Monastery. From here, however, some of the relics of Gevorg were taken to Georgia for the treatment of the Georgian prince. To preserve these relics, the church of St. Gevork was later built in Tiflis (Tbilisi). The four-dimensional dome basilica composition of the Mughni monastery is built of pure black and yellow tuff. On the west side is a three-story hall in the open air, in the middle of which stands a rotunda bell tower. The spacious and high prayer hall ends with a semicircular abscess on the stage, on either side of which there are rectangular, buried chapels. The interior is divided into two pairs of cross-shaped arches and three vessels with arches. The dome rises to the center of the hall. 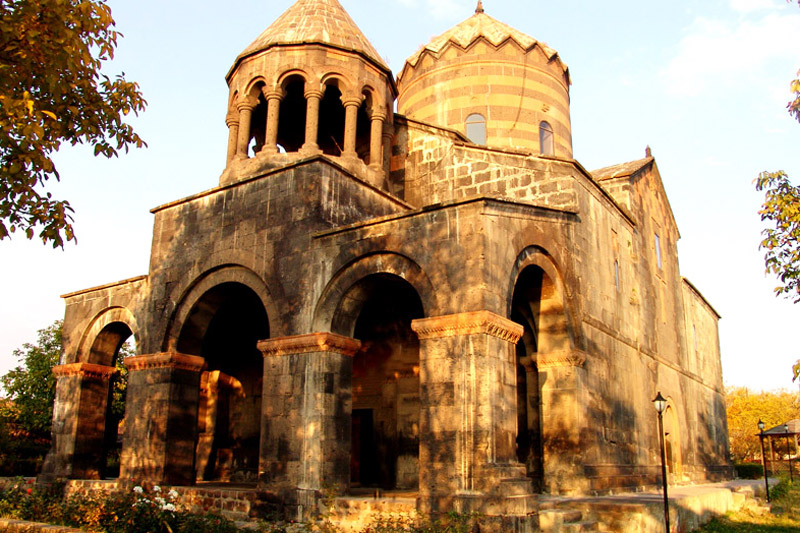 In the appearance of the church, the use of black and yellowish tuff plays an important role. The southern entrance is distinguished by an exceptional rich and high design. The rectangular plan of the monastery, whose walls are made of coarse basalt, have circular pyramids in two corners. Secular structures are grouped on one side of the complex. Dwelling rooms are located around the open hall and adjoin to the fence wall. In the courtyard of the Mughni Monastery there are many cross-stones (khachqars). The oldest installed in 932, and the newest – in 1975. It is noteworthy that the last khachkar was staged secretly at night, and it is not known who brought it. From the river Kasakh to Mughni about a kilometer (1 km) road was stretched, which was used to rescue in dangerous situations, to receive water and to save manuscripts. The day of pilgrimage of the monastery of St. Gevorg is the last Saturday of September. Mughni Monastery is one of the best monuments of Armenian architecture of the late Middle Ages.