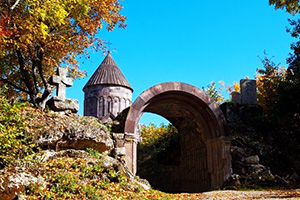 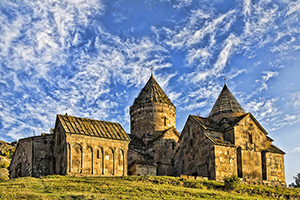 Makaravank monastery is located at the foot of Paitatap mountain near the village of Achajur, not far from Idjevan. The Aghstev valley, the steppes of the Kur River, and the panoramic view of the opposite ridge cover the viewer. Makaravank, a spiritual and cultural center of historic Mahanaberd, is one of the most remarkable medieval architectural complexes, one of the unique examples of Armenian culture, with delicacy and perfection of decorations and especially sculptures. Makaravank consists of the old church, the main church, the gravestone, the church St. Astvatsatsin, the courtyard, the chapel, the fountain, the walls, the cemetery, the residential and auxiliary constructions. The only historical mention of this monastery belongs to the Armenian historian Kirakos Gandzaketsi. He mentioned that the wife of the prince Vakhtang – Arzu Khatun with her daughter sewed the curtain for Makaravank. According to the cross-stone (khachkar) inscription preserved on the territory of the monastery, it was founded in 1205.

The main church is a domed building with an elongated inner cross, with two-story altars in the four corners. The church interior is vast, bright and impressive. Among the masterpieces of Armenian medieval art there are unique sculptures on the facade of the stage, legendary creatures with a human head, fish, a man with tools in his hands, who is probably the architect of the church, and bearing the inscription “Yeritasard”, which means “young”. With Makaravank, a tradition is associated, according to which the monastery was built by a master named Makar and his son. The son took the stones, cut them, smoothed, decorated and the father built. The walls of the monastery gradually rose, and Makar was already high from the ground. He spent the nights on the half-built walls of the monastery until he finished the building. Once Master Makar notices that the stones do not stack on each other, and the ornaments are not the same. He asks what happened to his son and was answered that he was sick. Makar realized that his son was dead, he throwned of the monastery wall and died. Master Makar buried under the wall of the monastery, and the monastery was named after him – Makaravank.