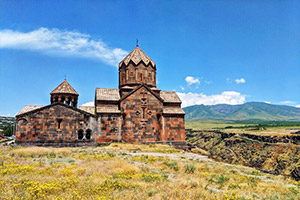 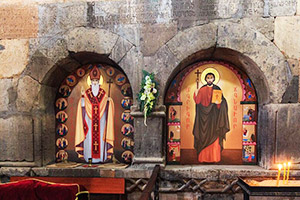 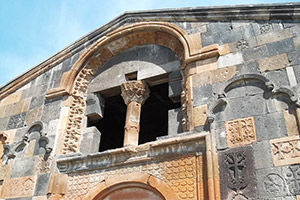 The Hovhanavank Monastery complex is located in the village of Hovhanavan, on the edge of the gorge of the Kasakh River. Perhaps it was dedicated to the Jesus Baptist St. Hovhannes Mkrtich. Traditionally, the monastery was founded in the 4th century, when Gregory the Illuminator built the oldest building of the complex – one – nave basilica. It was rebuilt in 573 BC (the wooden roof was replaced with stone arches). Another restoration was carried out in 1652. The western facade, a big arch, three windows and frescos are well preserved. During the last reconstruction, the emblem of the Vachutian dynasty was depicted on the eastern facade – a giant eagle with a dove in its claws. 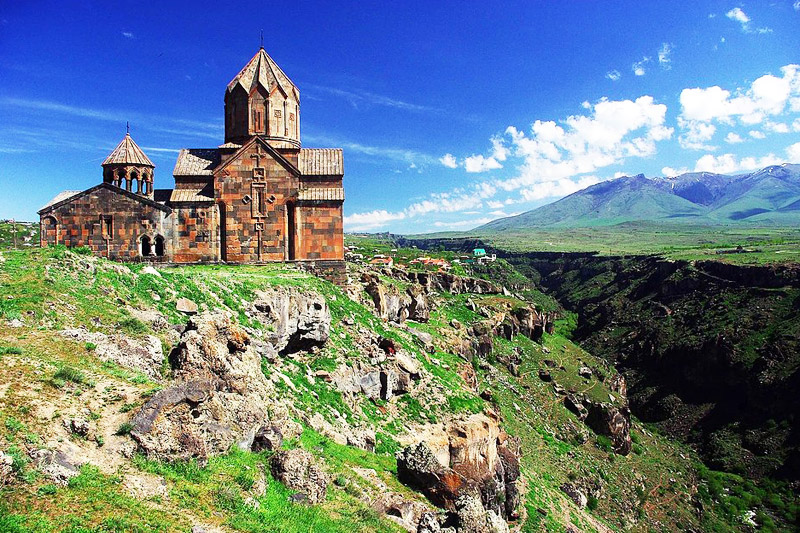 To the west side is a basilica with an unusual structure. Here there are inscriptions, which date back to the 12th-13th centuries. The main St. Karapet church was built by Prince Vache Vachutyan in 1216-21. It is a cross-shaped inside and rectangular outside dome-shaped structure. A chapel with a four-column central structure adjoins the church and the basilica. About 20 valuable manuscripts preserved in Ovanavank are currently in the Matenadaran of Yerevan.